It's so sad to say, but this is likely the conclusion of the Bug Adventures series. I haven't written any more books and the bugadventures.us domain name has expired. So, thanks for reading! This has been such an amazing experience for me.
Posted by Jake Swartwout at 9:35 AM No comments:

I just realized that I forgot to post about this:

Bug Adventures Book 16 is out on Smashwords!
Go check it out to hear what happens to Phillip and his crew. 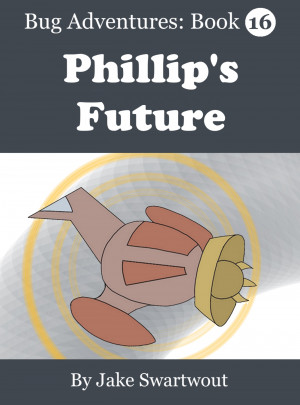 On a journey out into deep space, Captain Phillip P. Pillbug receives a mysterious signal from an unrecognized ship. Taking the chance, Phillip leads his crew to rescue the small spacecraft. Little does he know, he'll find a version of himself that challenges the safety of his ship and the fate of his crew.
Posted by Jake Swartwout at 12:28 PM No comments:

Since we're not going to publish it, I thought it would be fun to post the old book 16 here. So here it is...


1. Fiona Firefly was buzzing around Bugtown, enjoying the cool air, when she smelled smoke. She looked over to see Molly Moth's house was on fire! She buzzed over quickly to see if she could help.

2. At the scene, fire ants were rushing around trying to put out the fire with water from the nearby Bugtown lake. She arrived just in time to see a firefly jump out of the window carrying Molly.
3. He buzzed down to the ground, giving Molly to the doctors to treat her burned wing. He then ran back inside to search for any other bugs. That was Finn, Fiona's husband. She thought he was the most courageous bug alive.
4. The fire quickly got put out, and she returned back to her normal life. Except, Finn began acting very strange. He kept asking her to invite Larry Ladybug over, who she had never even met. When she finally did, he seemed relieved and left for a walk.
5. Larry arrived, and they began talking about nothing. They were interrupted by his phone, and a frightened voice came on: "Sir, your mansion is on fire!" Both Larry and Fiona jumped up, quickly running to his limo and speeding off to the mansion.
6. The fire ants were there, with Finn helping carry buckets. Apparently he was called during his walk. Thankfully, nobody was inside, but Larry was extremely upset.
7. In a few more days, the same thing happened. Finn made Fiona have a meeting with Sam, while he stayed home. While she was out with Sam, they heard the sirens and rushed over to see Sam's house on fire.
8. Fiona was scared. At Sam's house, she heard the police talking about an arsonist, and she feared that it might be Finn! She was too scared to ask if it was true, but he definitely was acting strange.
9. In a few days, Finn asked her to invite Betsy Beetle over. She had a plan though, so agreed. Following her plan, Fiona called Betsy, except asked to meet at Betsy's house. This way she could know for sure.
10. On the day they planned, Finn suspiciously left again. After he was gone, Fiona ran to Betsy's house as quick as she could. She tried to relax, but keep looking around for the arsonist. After a while, she heard a noise out front.
11. Right as Fiona turned around, a wasp threw a match, and the door was covered in flames. Fiona was shocked when Finn jumped out of the bushes, tackling the wasp. Sirens sounded very close, and soon a fire truck arrived with the police right behind.
12. Several fire ants quickly unrolled a hose and extinguished the fire before it spread. Pat the Policebug also came running out, handcuffing the struggling wasp. Once free, Finn went over and hugged Fiona. “I’m so glad you’re alright.”
13. He could finally explain what was going on, and pulled out a paper to show her. He said it was a note given to the firemen, threatening several powerful bugs. Nobody had believed it until Molly's house caught fire, exactly as planned.
14. Finn had wanted to keep these people safe, but needed proof to convict the wasp. But with Fiona’s help, they caught the arsonist and Bugtown was safe. Fiona looked at Finn again and saw the bravest bug she would ever know.

Eh? Right? It's convoluted and confusing, but hopefully you enjoyed it anyways.
Posted by Jake Swartwout at 2:46 PM No comments:

After completing the Firefly-Arson book 16, we felt as though it did not match well with the Bugventures style. It was too complex, convoluted, and just a little strange. While it is a fun story, we have decided that it does not belong in the series. Instead, I am planning book 16 to be a space adventure, trying to use a more fun and whimsical style of writing. Sorry for the wait, but it'll be worth it!
Posted by Jake Swartwout at 2:01 PM No comments:

Why do all of my books have only 14 pages? Well, the answer is unsatisfying. When I created the first, handwritten, hand drawn book, I didn't want to waste paper in case it failed. So, I took 7 pieces of paper, cut them in half and glued them front to back so my marker wouldn't bleed through. 7 pieces of paper can make 7 double sided half pages which becomes 14 pages to write on. I thought this was enough to write on, but not wasteful, and it worked great for the first book. The idea stuck, and I continue using it to today.
Posted by Jake Swartwout at 11:20 AM No comments:

Book 16? Yes! After a long break, I finally got an idea... and its a good one! Full of action, fires, and a firefly couple, book 16 is sure to be an exciting read
Posted by Jake Swartwout at 11:08 AM No comments:


With his brother in the hospital awaiting surgery, Tyson Tarantula risks everything in a boxing match. Little does he know, the town has it out for him, and his opponent Sam Spider will do anything to win!
I'm happy to announce that Tyson's Tussle has been finished and published on Smashwords! You can download it for free or just view it online. 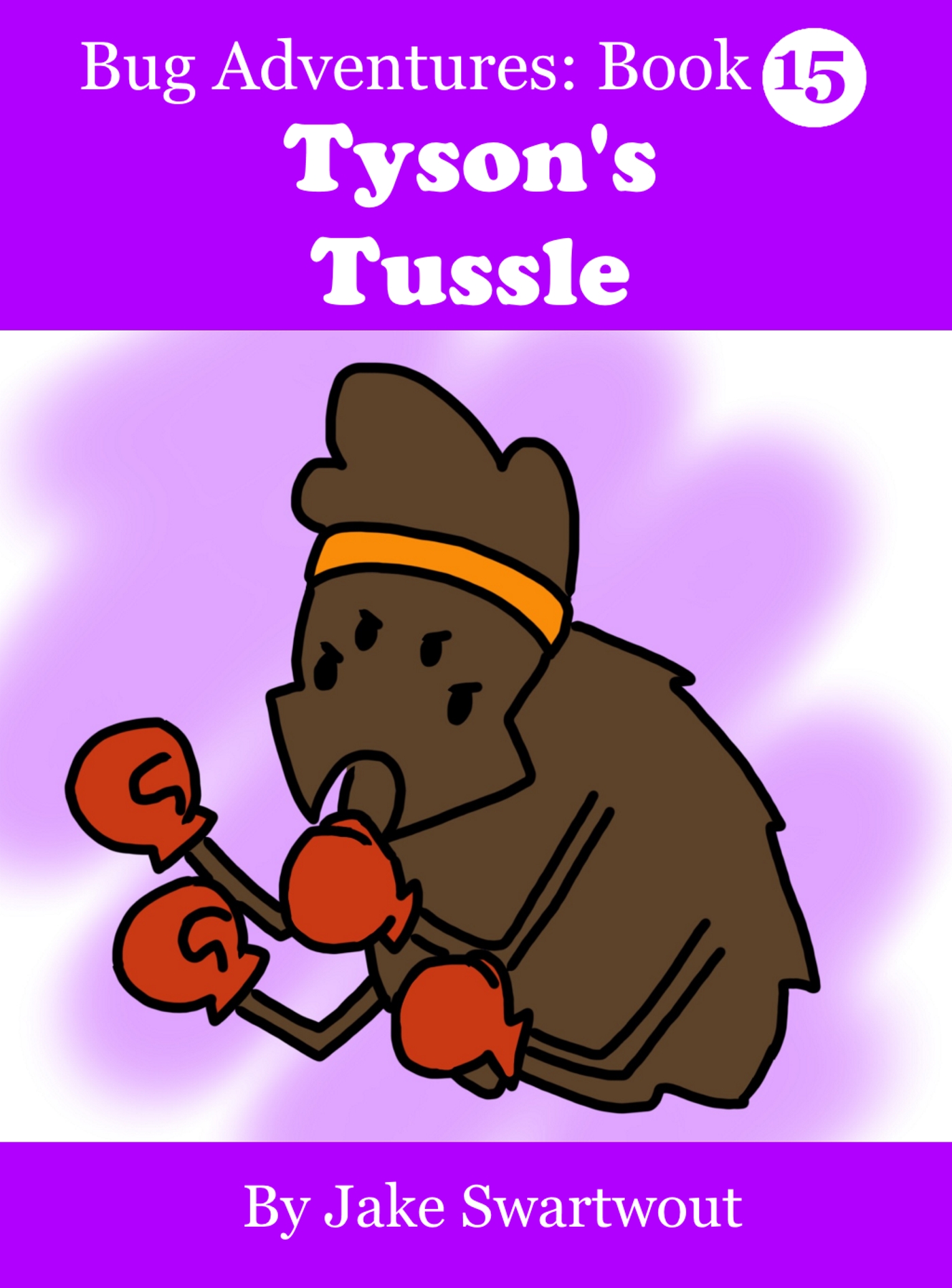 This one is really touching and has a good moral, but it is also a fun story to read.
Posted by Jake Swartwout at 10:02 AM No comments:

Book 15 is on it's way! It introduces a bunch of new characters and the art is looking fantastic! In it, Tyson Tarantula enrolls in a boxing match to help save his brother.
Here's what they look like:
It should be done very soon, but I don't know if it will be published online. I really like this one though!
Posted by Jake Swartwout at 7:56 PM No comments:

Al's Escape, Book 3 in the series, is now finished! It's available for free here on Smashwords
Go check it out and leave a review 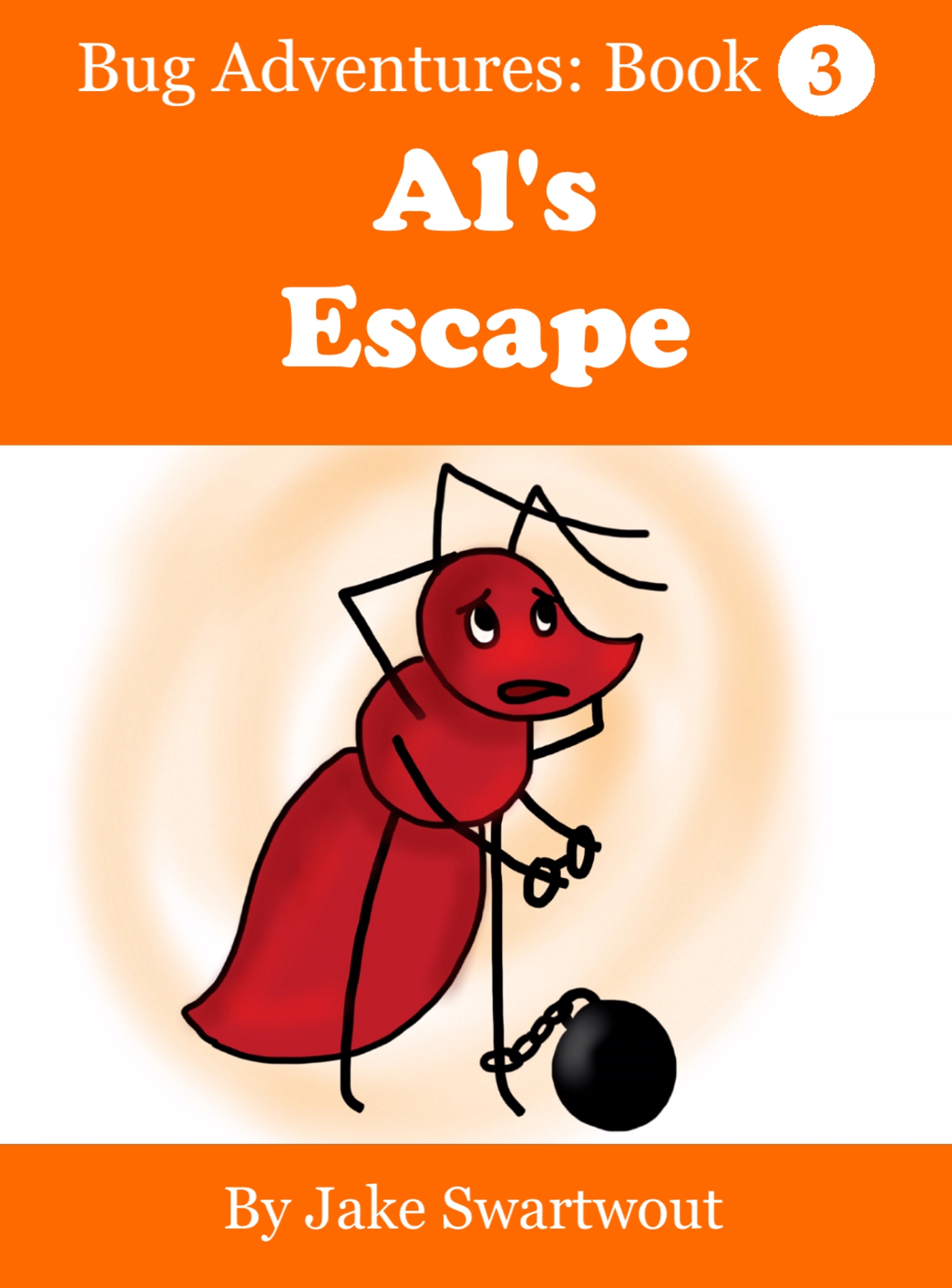 Al Ant is enjoying a day at the BugTown Museum when a valuable vase goes missing. He is accused of the theft and thrown into jail with the notorious Sam Spider. Can Al clear his name, or will he spend his days locked up with Sam?

Gary's Mystery has now moved over to Smashwords and is available for free! Check it out and make sure to leave a review. 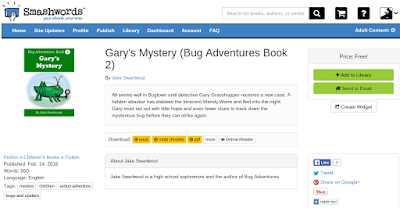